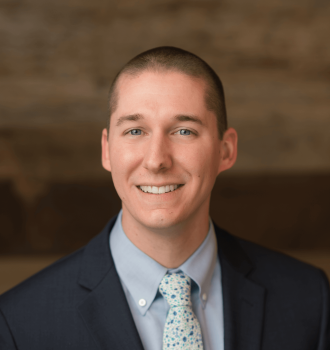 Ben was born and raised in Paris, Kentucky, a small town near Lexington, the home of the Kentucky Wildcats. After high school, he attended Samford University in Birmingham, Alabama and graduated in May 2013 with a degree in political science and a minor in history.

After graduating from Samford, Ben attended law school at the University of Memphis Cecil C. Humphreys School of Law. During that time, he served on the Editorial Board of the University of Memphis Law Review as Senior Articles Editor, and his Note was chosen for publication in Volume 46 of the Law Review. Ben also received the CALI Award for the top grade in Criminal Law, Administrative Law, and Food & Drug Law.

Also while in law school, Ben provided pro bono work and was recognized as a Law Student for Justice on the Tennessee Supreme Court’s 2016 Pro Bono Honor Roll. He also received the Dean’s Distinguished Pro Bono Award, Silver Level. During his third year of law school, he held the position of Vice President of the Health Law Society.

Ben also spent time working alongside professors and judges while in Memphis. During his second and third years of law school, he worked as a Graduate Research Assistant for Professor Eugene Shapiro, who primarily focused his research in the areas of constitutional law and criminal procedure. In the summer of 2014, Ben interned for the Honorable J. Steven Stafford of the Tennessee Court of Appeals, and during the spring of 2016 he externed for the Honorable Sheryl H. Lipman of the United States District Court for the Western District of Tennessee.

Ben graduated with his Juris Doctor in May 2016 and successfully completed all of the requirements for the Certificate in Health Law, with honors. After sitting for the Bar Exam, Ben worked as the law clerk to the Honorable Royce D. Taylor of the Circuit Court of Rutherford County until joining McCarter | East PLLC in January 2017.

Today, Ben is an active member of the Tennessee Bar Association and the Rutherford/Cannon County Bar Association. He also volunteers his time with Murfreesboro Young Life, and he has coached youth basketball at Providence Christian Academy.

He is married to Caroline Ingle Lewis, a Murfreesboro native and a former second grade teacher at Providence Christian Academy. They share one daughter, Annie, and one dog, Ollie. When he is not working or spending time with family, Ben enjoys playing basketball, reading, exercising, and kayaking. He also loves watching and cheering on the University of Kentucky Wildcats.